Ghost week - or how I got my 10th Linden Bear

In retrospect, this problem has probably existed for quite a while now, and I simply did not notice. But let's start at the beginning of this rather unusual week, my first really longer interaction with Linden Lab customer service, and it 's - spoiler - happy end.

It was exactly a week ago, on Saturday, that I noticed that I can't change skins anymore. Since this is not something I do all the time, and since my Belleza Jake V2 avatar does not support proper Baked-on-Mesh (as I thought at the time), I assumed I was being clumsy. On Sunday morning, I tried it again - realised I am not clumsy, realised it is NOT a problem of the mesh body since it happens on the system body as well. So I filed a ticket with Linden Lab support.

My avatar seems somehow messed up. I can't apply skins or alphas. I took off ALL mesh bodies, switched back to a pure system body, but regardless what skins or alphas I wear, it still shows my last skin. Also the eyes - which have no alphas applied - are hollow. I relogged several times, I cleared cache, I tried different viewers - to no avail. See the attached screenshot: This look should be impossible, and in fact, you should not be able to see me at all. 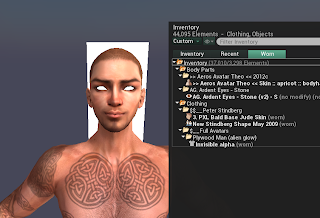 With the usual tickets I file every once in a blue moon, it took 2-3 days before someone replied. I was rather surprised, when at the same time (Sunday, mind you), one Kady Linden got back to me. Even more surprised was I, when I read that she indeed found a problem in my inventory:

I was able to locate some corruption in your inventory that may be contributing to the issues you are experiencing. I have initiated a script to repair the corruption, which may also clear up the issues you are experiencing. In order for it to work properly, it is very important that you log in using the Second Life official viewer. You're welcome to resume using your regular viewer of choice after the repair has completed.

What followed was a detailed list of step-by-step instructions, which boiled down to me having to use the official viewer, go to a quiet region, let myself be logged in for 20 min, then clear cache, then log back in.

I followed her instructions to the letter on Monday evening, unfortunately, it did not help. I did it again. And it did not help. What it did, however, was made things worse. The end result, as sent it to Kady, was:

Hi Kady,
thank you very much for your help. Unfortunately, it only solves half of the problems.

I did as described - the inventory loaded fairly fast, I waited 20 min, cleared chache, relogged - but the problems persisted. In fact there was even more, since I could not access any outfits or wearables anymore, neither attach nor detach.
I repeated the process (yes, with the official viewer), and afterwards, outfits were back. But still some problems are still there - in fact it seems there are MORE problems now. The following is the status quo:

Can you kick the servers again please?

This was all rather underwhelming, and very very annoying. This is how I saw myself during that time: Clothing loaded (after going into 'Appearance' mode), but no skin or anything loaded. 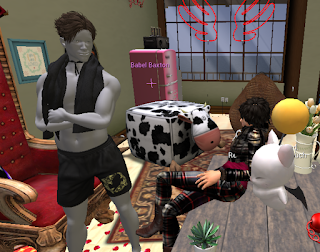 And this is how other people saw me, regardless how long they waited. 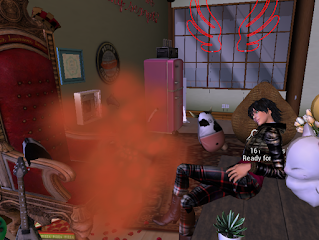 That started a daily conversation with Kady, who was really helpful during the whole process, and solution oriented. At one point she asked:

I am still seeing some corruption in your inventory, so will run the fix again. However, for troubleshooting purposes we wish to login to your account and investigate the issue further. You do not need to provide us with your password, and there is no need to reset your password afterwards. Let us know if it is fine with you for us to proceed with this measure!

That was kind of freaky. The avatar is a rather personal thing, but of course I wanted (and needed) that problem to be fixed. So I agreed that she could do it - and she even asked what times are convenient for that. Gina actually caught her in-world driving my avatar once:

Eventually, Kady had to give up and escalate my issue to the dev team.

Dear Peter,
Your case is now in the hands of the developers. Hopefully, we'll get some resolution soon, but please do know that it can take a few days, realistically.

The developer team never got back to me, however, on Thursday evening, when I logged in (with sinking heart), to my huge delight, all was back to normal.

They never told me, what it was. Even Kady didn't know. Technical-me would be rather curious about it, but I get why they don't tell you. All is back to normal though, so that's what counts.

I am impressed by the outstanding service the Lab provided otherwise. Kady communicated clearly, extensively, didn't give the impression to consider me stupid, and seemed to see it is some kind of challenge as well. I had a small chat in-world with her, when I asked her for her Linden Bear, and she hinted at being a longtime SL resident herself (they are not allowed to disclose their non-Linden identity). So she "gets" SL, and she realised what a nuisance this issue was for me.

I am also surprised how much this affected me. I could have chatted with friends, I could have scripted, but being a grey alien to me, and an orange cloud to others, took the fun out of it, so I barely logged in during that week. An interesting experience. 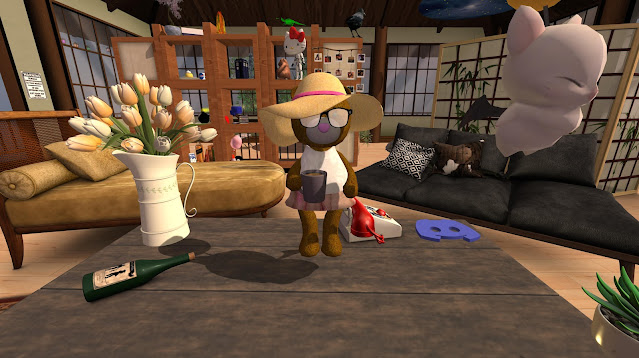 ... so get over with it. Not sure how long this'll last, but I plan on sharing some stuff and this seemed the best place for it. Though nobody will read it anyways, but oh well.

I was never gone in the first place. Just that I felt everything has been said, and there was no need for the blog anymore.  I still log in almost daily into SL, and do more or less what I always did. Enjoy friendships. Love. Do stuff.

A few remarkable things happened. In no particular order.

Gina has returned last year. For good, it seems (knock on wood). You know the kind of person you don't talk to for years, and then meet them again and pick the conversation up right where you left it off? Gina is such a person.

London has gone missing, and then returned - sort of - many years later. There is closure, which is more than I had hoped for.

Ivanova is missing since 9 months by now. I hope she is well. I miss her.

I moved my SL home two or three times since the last post worth of that name here on the blog. The latest version is on a lovely sim I share with Ivanova, Gina, Zippora, Llyria and others. It's a bit like a hippie commune, come to think of it.

Llyria is the most important person in my Second Life (and partly beyond) for almost 5 years now.

I am fully mesh by now - the Logo head was the last piece, complementing the Belleza body.

My two previous businesses - GREENEconcept with Ivanova and Babel Translations - are officially or factually dead. Babel has experienced a rather unexpected revival in an equally unexpected direction, which is mostly the reason for reviving the blog (no worries, it won't become a marketing platform).

That's about it, in a nutshell. If anyone reads this at all, I'd appreciate a small comment.

Posted by Peter Stindberg at Friday, April 02, 2021 No comments:

Found a little something all shape creators, professional or personal, ought to memorize...

Update 2021: DeviantArt embeds have changed or arn't a thing anymore. Here's the link to the graphic which still exists. You need to be logged in to see it as it shows - the horror - a naked human: https://www.deviantart.com/leadbirdie/art/HA4A-XIX-398890842
Posted by Peter Stindberg at Wednesday, September 11, 2013 No comments:

For those of you (still) using my aggregated fashion feeds: due to the recent shutdown of Google Reader, the aggregate feeds are currently unavailable. Since I have been approached about the feeds, I am loking for an alternative at the moment. Google Reader acted as input to my feed wrangling magic - I have to evaluate a few alternatives before I switch the service back on again.
Posted by Peter Stindberg at Saturday, July 27, 2013 No comments:

One of the beauties of SL was, that every clothing and every garment fitted right away.

One step closer to reality.
Posted by Peter Stindberg at Thursday, June 07, 2012 2 comments: 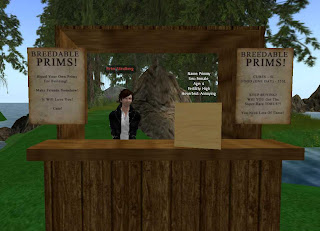 My friend Chav Paderborn often has some funny, dorky or eclectic ideas. Her new dabbling is taking a below-the-belt swing against the latest fashion of breedable pets. In a humorous way she built a stall selling breedable prims, along with outrageous food bills and the promise of super rare items. Everybody who has heard about breedable pets - even hardcore breeders I talked to - could not help but chuckle about this piece of art.
Except my landlord.
Less than 24 hours after I have set up the stall on my land, it got returned to me without any comment. After inquiring, I got the one-liner "breedables are not allowed on our estates" back.
Mind you, Chav's creation does not actually breed. Nor does it actually sell anything. It only includes one script at all, reacting to touch, and giving you one of the plywood cubes shown on the image.
Yet my landlord saw "breedable", and in best established shoot-first-ask-later fashion, returned the object.
Sometimes, actually LOOKING and READING first, and if in doubt, ASKING next, would do the trick.
Oh well...
Posted by Peter Stindberg at Tuesday, June 14, 2011 4 comments: